Maduk, 24 years old and living in Amsterdam, is one of the most promising new talents in the Drum & Bass scene. Fresh off winning the “Best Newcomer Producer” award at the prestigious Drum & Bass Arena 2014 Awards, Maduk proves to have a worldwide range of support. With releases on labels such as Hospital, Viper, UKF, Fokuz, Allsorts and his own Liquicity Records (which he co-runs with fellow Dutchman, Maris Goudzwaard) this youngster is just getting started!

Maduk is also one half of the successful YouTube channel turned record label, Liquicity which has grown to build one of the largest communities of liquid drum & bass in the world and has played a key part in reaching new audiences for the smoother side of bass music over the past eight years.

Following the announcement of his exclusive signing to drum & bass empire Hospital Records, Maduk presents his debut release with the label, ‘Not Alone’ – an energetic three-piece set of dance-floor feelers that accelerate through vocal chop ups and piano lead melodies. Here he has drawn from a number of local dutch talents with lively layered vocals from MVE & Frae and a collaboration on production with electro-house duo Duckfront.

And now for the DNB◉UNITED exclusive interview with Maduk:

Q: What was the first Drum and Bass album you ever listened to?

Q: What was your first big break as a Drum and Bass artist and how did it feel to know your career was going in the right direction?

A: To be honest I don’t think there is one major ‘breakthrough’ point. My ‘career’ developed very gradually over the past 4-5 years and to me this also feels best for me. Building everything slowly but surely (one of my favourite Drum & Bass tracks all time by the way) and take time to think things through!

Q: What gave you the inspiration for this amazing new album?

A: The album consists of tracks that I made within the last 3 years and basically they are a reflection of my mood! When listening to certain Drum & Bass myself I really can feel my energy growing. This special “euphoric” feeling is something I always try to get into my songs.

Q: What is one Drum and Bass artist that you would like to work with that you haven't had the chance to yet?

Q: We like to ask all of our artists at least one technical question... What is your favourite music production software to use and why?

A: Good old Camelphat, I use it on everything, even on my sandwich and in my soup.

Q: Finally, you are on a deserted island…you take your five favourite DNB records with you…what are they?

A: I have more than 5 but some of them I wouldn’t mind listening on a deserted island:

DJ Fresh – All that Jazz

We just want to thank you for taking the time for us at DNB◉UNITED RECORDS. We want to wish you luck in all your future endeavors. Music is a gift. Thanks for sharing your's.

Maduk’s new release "Nothing More" hits you straight away in the heart! As I listened to the first track, “Nothing More” I was gripped with Maduk’s power and explosive energy that festers under the surface of this blast furnace of Drum and Bass. Only Maduk can bring the iron fist and velvet glove to pull this one off so well.

Delivering a steady source of fast beats, layered synths, and that trademark sound that I have come to love and expect with every Hospital release. The lyrics tell a story of arriving at new day where the promise of love is all that is needed. Lyrics (The new days ahead now, going to live what I believe, It's gonna move us along now, we won't stop trying, there's nothing more we need). Pow! Maduk hits the gas and the song takes off !

I'm left with a commitment to “Live What I Believe” as the songs mantra and my personal take away. Beautiful, well composed and modern. Maduk is an urban poet singing his story of hope and love from the heart. A man who can show his emotional connection to the world through his art has the sand to be the man.

Listening to the rest of the album, it delivers a driven sound of a continuous uninterrupted vibe of modern day Drum and Bass. Maduk has clearly evolved over the last year. Like any good producer of the times, Maduk is able to take many organic and electronic sounds and incorporate them into what is becoming his own signature style. I feel that this album has such a young and driving force behind it but doesn't lack the strong grounded foundation that often can be absent from younger producers. I believe this release has the legs to crossover beyond the Drum and Bass genre and will touch and inspire new listeners.

Lastly, Drum and Bass is not underground anymore. The very reason is because of artists like Maduk and record labels like Hospital. Together, they are ushering the sound of a new generation into the world. One thing is for sure, we at DNBUNITED.COM will be listening and promoting Maduk's “Nothing More” for the days ahead. Long live Drum and Bass!

*Reviewed by BC#9 DNB◉UNITED RECORDS / DNBUNITED.COM / THE UNITED STATE OF DNB

Also be sure to check out our exclusive interview with Hospital Records Artist Maduk! 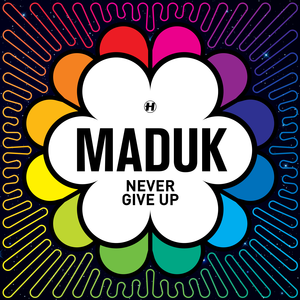 Maduk - Got Me Thinking (feat. Veela)

A name that’s been on everyone’s lips, Maduk is leading the way for the next generation of drum & bass producers, bouncing around Europe with his uplifting, high-energy productions. Signing exclusively to Hospital Records in 2015 cleared the path to complete his highly anticipated debut album. Twelve colourful tracks make up the spirit-raising ‘Never Give Up’ LP – a guaranteed mood-lifter that’ll have crowds up on their feet world over. As the title track would suggest Maduk’s story is of sheer determination, with hard work and passion for the music he’s gained a dedicated following that have become like family. His LP premiere pushes positivity with a wash of vocal lead tracks. The lively, feel-good vibrations of ‘Just Be Good’ (featuring Nymfo) and ‘One Last Picture’ (featuring Kye Sones) fit with the frenzy of animated elevations in ‘Got Me Thinking’ (featuring Veela) and ‘Nothing More’. He continues to liberate the senses with the shimmering sounds of ‘One Way’ and drives forward with warm guitar strums on standout track ‘The End’ (featuring Voicians). The ‘Never Give Up’ LP also includes his previously popular single ‘Not Alone’ and Logistics collaboration ‘Solarize’. As a co-founder of YouTube phenomenon turned record label Liquicity and with ‘Best Newcomer DJ’ and ‘Best Newcomer Producer’ awards under his belt Maduk has played a huge part in igniting the fire for a growing movement of liquid drum & bass lover. Now reaching across the globe his force is set to continue with the release of ‘Never Give Up’ this April.